skip to main | skip to sidebar

Another Halloween, come and gone. Not too sure about these costumes. My youngest went as a witch. Again. I think she spent all of two minutes on her costume. More interested in candy than in presenting herself as a proper witch. My son went as a Clone Trooper. I think he looks like an alien kitty.
And my two oldest went as...well, I'm not sure! They didn't do much trick-or-treating. They handed out candy and terrorized the little lions, bunnies, and kitties that came timidly up to our door. My second oldest is supposed to be a spook of some kind. I think she looks more like the bride of Achmed the Dead Terrorist. Fans of Jeff Dunham will know what I'm talking about. 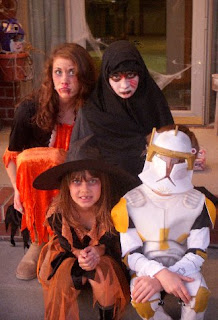 So, my husband takes the younger two out. They're gone for two hours or so. Check out the plethora of candy they brought home. That's quite a haul! Naturally, I had to "check" it all to make sure it was safe. Now, where did I put those spandex pants? 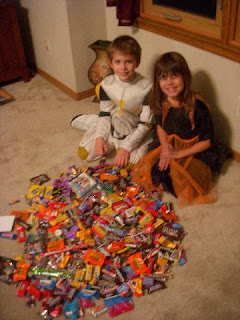 I'd be smiling too if I had this much candy.

Before you start thinking that these kids are a little on the odd side, I thought I'd better show a more presentable picture of them. Friday, they got their pictures taken. They were awesome for the photo session. Not one problem with them. But I wanted to slowly strangle the photographer. She stressed me out so much that I wanted a cigarette by the time we were all done. And I'm not a smoker! 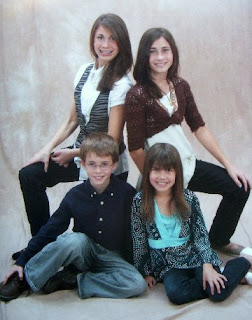 Posted by Beadstylin at 1:02 AM

Beadstylin
I'm pretty much a homebody. I do like to camp and fish. I work crossword puzzles like mad and spend entirely too much time online. I drink a lot of coffee and dream of acreage out in the country. My hubby and kids are everything to me. And I adore my pets: two kitties and way too many toads.