skip to main | skip to sidebar

I Toad You So

Everyone has something about them that's a bit different. Okay, maybe even odd. For me, it's always been a fascination with toads. From a very young age, I have never been able to walk by one without picking it up and making a fuss over it. I thought maybe I would outgrow this silliness, but as you can see from the picture below, it doesn't look like my toad obsession is going away anytime soon. 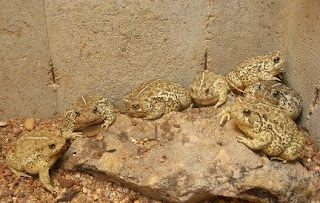 Pictured here are seven of our nine pet toads. Aren't they adorable! I had a TIME getting them all to cooperate for the camera, and I still couldn't get two of them in the picture. I especially like the picture of Penelope here (third from the left). To most people, it might look like she's pouting because she doesn't want her picture taken. However, I know better: she's our nearsighted toad, and no doubt probably thinks there's a bug right in front of her.

We keep these cuties outside in our giant window well. That I know of, only one has escaped, and that had to have been some kind of amazing toad acrobatics, as the window well is about eight feet deep and toads are rather clumsy creatures. (Way to go, Daphne! You definitely earned your freedom.)

Keeping toads as pets in our window well has worked out great. (I call them pets, but Hubby insists on calling them prisoners.) They are still outdoors--in the environment--and their care is minimal. We keep a container of water for them to sit in (they don't drink water but rather absorb it through their skin), and we toss down bugs in the evening. During the heat of the day, the toads burrow in the sand to regulate their body temperature. Sometimes you will see a little nose or head sticking up out of the sand. Come fall, they burrow very deep until spring. I miss my toadies during the winter months.

They chow down on a wide variety of insects and worms. They are partial to earthworms and Junebugs, but they will not touch slugs. Can't really blame them, can you? We also feed them roly-polys, spiders, crickets, grasshoppers, beetles, katydids, moths, and grubs. It is most entertaining to watch a toad eat a large katydid or locust. They will use their front feet to stuff the insect into their mouth. Sometimes there's a leg or wing sticking out and the other toads will try to get the insect away from the toad who caught it. Then a riot ensues and it's not a pretty sight to see toads riot.

After a toad eats a locust, you can pick it up and hold it to your ear and still hear the locust buzzing away inside the toad's stomach! If you listen closely, you can even hear the locust saying, "Get me the hell out of here!"

I hear toads can live up to 30 years or longer. I wonder if I should perhaps mention the care of my toads in my will--in case they outlive me. My beloved Belinda (below) has been with us for about five years. She is a very dignified and fat girl and I find this picture of her hilarious. 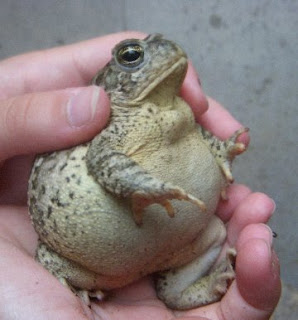 Everyone should have a toad or two. Or nine.

Beadstylin
I'm pretty much a homebody. I do like to camp and fish. I work crossword puzzles like mad and spend entirely too much time online. I drink a lot of coffee and dream of acreage out in the country. My hubby and kids are everything to me. And I adore my pets: two kitties and way too many toads.